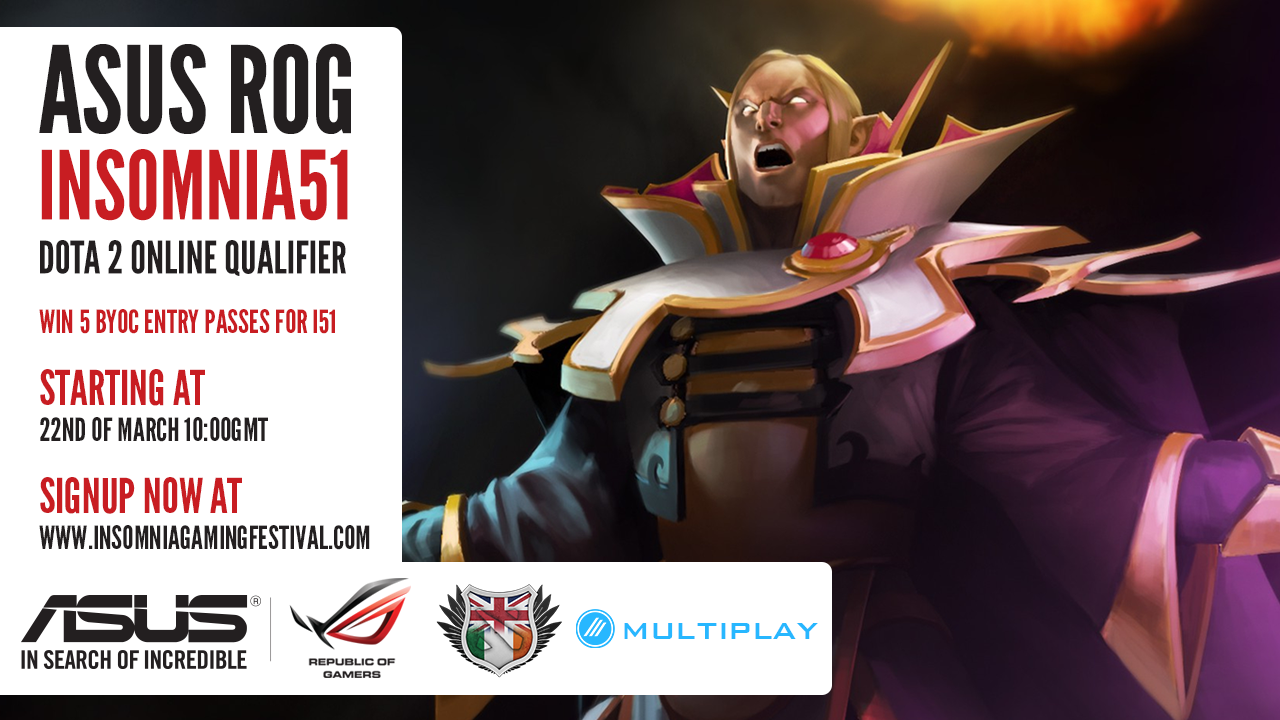 Dwayne “The John” Rockson continued their run of dominance with another success in the ASUS ROG Insomnia51 Online Qualifiers, taking home 5 BYOC entry passes for their efforts, a prize worth about £500.

In the first game; a Naga Siren, Ancient Apparition and Mirana aggressive trilane allowed them to establish an early game lead and some excellent individual plays from their Invoker and Doom enabled them to squeeze the life out of the game, despite some good team fights from Special Tactics.

The second game was much closer, with some fantastic teamfight execution keeping Special Tactics in the game when they were two barracks down, however, even the immense rat-dota power of Naga Siren was not enough for them to take the game with Dwayne eventually finishing the game after a hard fought team fight in the bottom lane.

Dwayne’s path to the final pitched them against AFKK in the semi-finals, which ended up being a comfortable game for the Rime-stack, despite Steam server issues forcing a re-make and some arguably unconventional picks coming out of AFKK. The Mirana/AA/Naga lane they would later use so effectively in the final was also devastatingly aggressive in this match, proving too much for a spirited and mobile AFKK line-up. Dwayne “The John” Rockson also took out Nearly Semi-Professional in the quarter-final stage.

4K MMR Special Tactics had arguably the more difficult route to the final, or at least the one more populated with UK Dota 2 stalwarts, defeating Reason Gaming and BRONZE on their way to the decider. BRONZE, in particular, have been at the business end of the last 3 UK Dota competitions but some exceptional Storm Spirit play by xy- enabled 4K MMMR to snowball too hard for the Thom-stack to keep up with.

For anyone who missed the action live, the games were expertly cast by Joe ‘JoeShow’ Styrka and Gareth ‘durka’ Bateson and the vods can be found here.

Brackets from the competition can be found here.

Thanks are also due to everyone from UKDota.net who helped administer the tournament and to ASUS, Republic of Gamers, Multiplay and Insomnia51 for their support of the competition.

To Dwayne “The John” Rockson, congratulations on another UKDota.net win and CU@LAN!